NAIROBI, Kenya, Jan 14 –  Paralympian Samuel Mushai headlines a deep field of five nominees who will battle it out for the Sportsman Living with a Disability category for the 2019 Safaricom Sports Personality of The Year Awards (SOYA) set for January 24 at the Mombasa Sports Club.

Mushai, the 2017 SOYA Sports Personality, will face off with Vincent Mutai, who won an unprecedented three gold medals from the International Para Athletics Championships last year.

The other nominees are Onesmus Mutinda, who also won three gold medals from the Special Olympic Games, John Koech and David Omondi who starred during the Africa Deaf Championships in Nairobi.

Consequently, multi-talented Asiya Sururu, who has qualified for the 2020 Tokyo Olympics in rowing and World Para Athletics bronze medallist Nancy Chelagat highlight the 2019 Sportswoman Living with a Disability category.

This year’s awards that apart from Safaricom as the title sponsor, has also been sponsored by the County Government of Mombasa, Kenya Pipeline, Communication Authority of Kenya, New KCC, Lapfund, Kenya Power, UBA Bank, Nairobi Bottlers, Kenya Ports Authority, NHIF, NSSF, Kenya Tourism Board and GOtv, will be returning to Mombasa County for the second year running where Kenya’s top athletes and officials will be feted for their exemplary performance in the eventful 2019 season.

Mutai won three gold medals at the 4th International Para Athletics championship held in Morocco. He scaled 6.36m to win the T46 long jump title before clocking 11.89 seconds to win the 100m title. He would also finish it off with victory in 200m in a time of 23.93 seconds for his one of the most successful outing for the athlete.

Whether Mutai will floor Mushai, who has won the category twice, and the rest of the nominees.

Mushai successfully defended his 5000m T11 title in the World Para Athletics Championships in Dubai, winning in 15 minutes 45.32 seconds aided by James Boit. Mushai also won a silver medal in the 1500m T11 race in 4:08.47 at the World event. The World champion went on to claim silver in the 1500m T11 race in 4:13.14 during the 4th International Para Athletics Championships in Morocco.

Mutinda successfully defended his title in the men’s 10,000 at the Special Olympic Games where he went on to bag the half marathon title in 1:11:34. He wrapped up a hat-trick with victory in 4x100m relays.

Sururu won silver in rowing at the Puma Engineering 2019, a feat that saw her qualify for Tokyo 2020 Olympics. Sururu went on to win silver in doubles at the Wheelchair World Team Cup Africa Championships where she reached singles semifinals.

She also reached the semifinals at ITF Nairobi Open Futures Tournament where she won the doubles.

Atieno claimed a hat-trick at the Africa Deaf Athletics Championships in Nairobi. The Africa record holder won the 100m in 12.87 seconds ahead of Nigeria’s Omona Assurance before she led Linet Nanjala to a 1-2 sweep in the 200m race where she clocked 26.17 seconds. Linet teamed up with Linet, Paul Simyu and Elijah Wekesa to win the mixed 4x100m relay in 47.06 seconds. 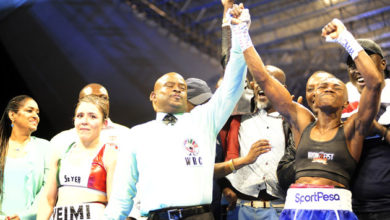