Soya 2018 sports team of the year (women), Kenya Lionesses, hope their performance from the just concluded 2018  World Rugby Sevens Series qualifier in Hong Kong will inspire them in the ongoing Commonwealth Games in Gold Coast.

They will then take on Canada at 12.11pm on Friday before wrapping up their Pool ‘A’ outing against South Africa on Saturday at 5.27am.

The Lionesses’ run at the qualifier ended at the semi-finals when they lost to continental rivals South Africa 12-7 in sudden death at Hong Kong Stadium.

Kenya for the first time stunned South Africa 24-12 for the first time ever in pool stages to top their pool and advance to the main Cup quarterfinals. The Lionesses sailed to the last four after stopping Argentina 17-12 in quarters.

“I was gutted on the sudden death loss but I am not disappointed because the girls played their hearts out,” said Wambua, who was among the top three coaches nominated for the 2017 Soya Coach of the Year award.

“The players raised to the occasion and I am sure they made the country proud,” said Wambua.

Wambua said beating South Africa for the first time was a major milestone for his team.

“It was the sweetest feeling ever since I started handling these girls. Their strength and growth came through continued struggle and effort,” said Wambua. He noted that the show was part of their growth and slowly they shall conquer the world like their male counterparts.

“We all remember how Kenya Sevens were thrashed by Fiji at the 1998 Commonwealth Games. However, they have gone on to beat the Fijians several times. Besides, they have also won an event in the World Rugby Series,” said Wambua.

A try from Andiswa Ndawonde in sudden death is what shattered Kenya’s hopes of making the final in a qualifier where the winner gets to play in the 2018/2019 Women’s World Rugby Sevens Series.

After a scoreless first half, it’s Zenay Jordaan, who broke the deadlock when she scored in the 11th minute before converting to give South Africa a 7-0 lead. Kenya battled to level after Janet Okello crossed the line in the two minutes later as Doreen Remour converted.

However, South Africa’s hope of making it to the Series were dashed when they lost to China 31-14 in the final. China had beaten Belgium 22-5 in the other semi-final.

Remour’s try in sudden death extra time had earlier seen Kenya reach the semi-final with a 17-12 win over Argentina.

The Argentines were a difficult opponent for the Kenyans, hogging possession for large spells of the fixture and were first on the scoreboard went skipper Sofia Gonzalez went over for an unconverted try.

Sinaida Aura scored for Kenya late in the half to restore parity as the teams went into the break tied 5-5.

Okello gave the Lionesses the lead for the first time in this match with a solo try from 65 metres but Gonzalez scored a converted try to tie things up at full time.

The Lionesses then lost Janet Owino to injury minutes into extra time but were still able to conjure up the killer punch moments after the Argentines had conceded a rare penalty.

Celestine Masinde created the opportunity that found Remour in space to race clear and find the try line, setting up a repeat clash in the semi-final against South Africa. 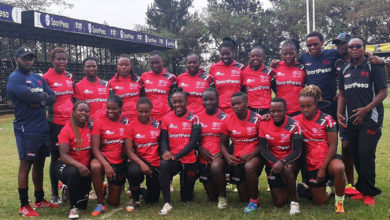